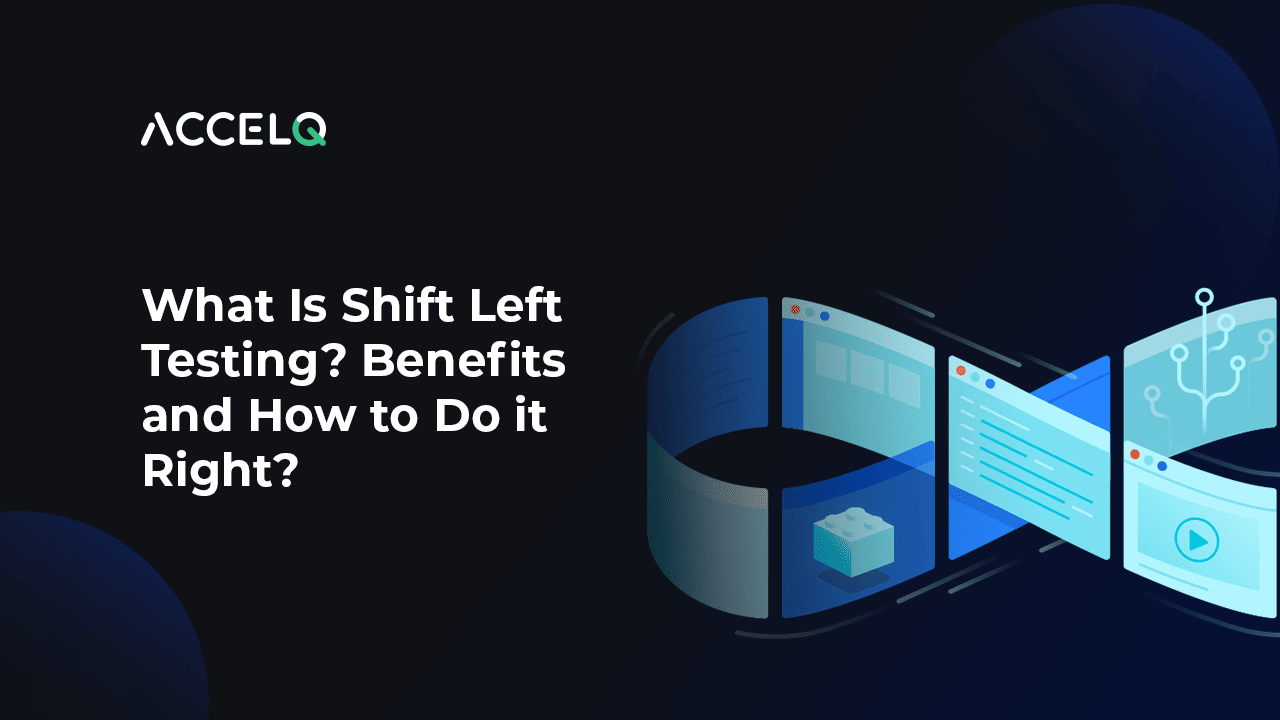 What Is Shift Left Testing – Benefits and How to Do it Right?

Shift left testing is gaining crucial traction amongst IT departments of businesses worldwide. The primary reason for its emergence is the delays that traditional software testing approaches are creating in the overall application development lifecycle.

Surveys have pointed out that software testing is the number one reason hindering faster release cycles for software projects worldwide.

Delays can often result in projects running out of schedules, exhausting budgets, and holding onto resources for a longer duration. All of this can prove to be a nightmare for enterprises and could cascade into much larger problems.

Shift left approach was conceived and brought into the mainstream to eradicate this problem primarily.

In this blog, we will discuss:

What is shift left testing?

In the traditional approach, testing followed the sequential pattern of a software life cycle, wherein quality assurance kicks in only towards the end of a project after design and coding. In the early days, software was simply a means to make the work of humans a bit easier. Hence, this approach to quality assurance wasn’t questioned enough to be considered for a replacement. But that is not the case today. Now that we know what is shift left, let us understand why is it important?

Why is shifting left so important?

The traditional approach pushed software testing towards the end of the software lifecycle. It had some major disadvantages. The biggest being the effort and cost of catching severe bugs or defects at a very late stage. A critical bug could render an entire application unusable, and developers may face a situation where they had to start from scratch again to redesign the software architecture to resolve the bug. Imagine if this scenario happens during acceptance testing? The results could be catastrophic.

In the modern agile software development methodology, the concept of the test often and start testing earlier is a perfect match. By interleaving testing cycles as a part and parcel of continuous delivery, it is possible to improve quality standards significantly through small and iterative efforts.

The test engineer performs the testing after every code addition or sprint. They can also leverage a Test Driven Development model where test cases are created for every sprint or code snippet before it is written. Upon finishing the code, it is validated for QA immediately.

What are the benefits of the shift left testing approach? 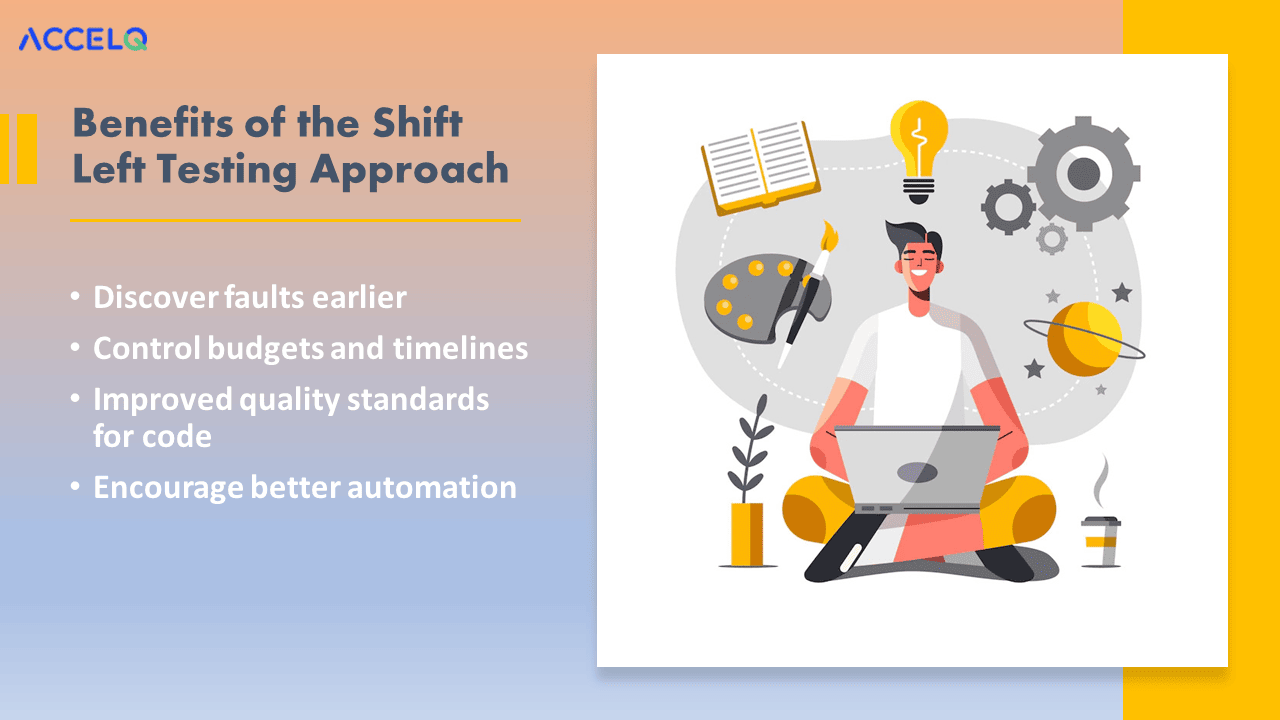 We have seen how software testing has evolved over the years to cover the entire landscape of technology evolution within enterprise applications. With architecture like microservices and cloud-enabled deployment becoming quite common, test initiatives also need radical changes to ensure consistent success.

Let us examine the top benefits of shift left testing:

The biggest takeaway of shift left testing is helping technology teams discover faults or bugs earlier in the development process. This can minimize the negative impacts of the bug or defect and set the path for preventive actions for future development sprints. The learning experience is also of immense value for test engineers as well as for development teams.

Teams can leverage the lessons from bugs identified in smaller code fragments as a learning model to design more resilient and defect-free versions of code in other sprints. The earlier discovery gives them the leeway to utilize time considerably better than the traditional model of testing at the end which leaves a very small scope for learning experiences.

Shift left testing envisages a model of granularity in testing. Test engineers get smaller code fragments for testing. It enables them to have better control over their workloads and predict timelines more accurately. By catching bugs earlier, they can prevent cascading errors or defects that may have occurred if testing occurred at the other end of the development cycle.

The granular approach thus brings better control over budgets and delivery timelines. There is better visibility into the scope of impact for bugs identified and the timeline for their closure.

As a continuation of the first major benefit, test engineers and developers get a breather from their workloads when the testing happens in an earlier phase. The lessons learned allow them to incorporate new strategies in writing code to prevent errors from reoccurring. The incremental effort eventually enables the development teams to produce quality code. This ultimately contributes to better customer experiences for the end-users using the application.

Higher-quality code also eliminates the need for frequent patch updates and fixes which usually create an impression of sub-standard digital products amongst customers.

Automation tools in testing work well when you involve them from day one of the coding cycles. Over time, as the code evolves, the automation platforms also have enough headroom to accommodate incremental changes in the test cases and test scenarios.

Testing Smaller code blocks can be rather easily and often with the help of automated testing platforms. This can lead to repeat and rapid testing which is a great way for teams to quickly make updates. Shift left approach thus empowers test automation platforms to deliver quicker updates on code snippets thus contributing to its stability.

How can businesses do shift left testing right?

Shifting left in testing proves important primarily because it

To achieve these benefits, businesses need to

Low-code test automation platforms can be a life-saver for enterprises when they migrate to a shift-left testing strategy. Such platforms help in reducing effort considerably and scale testing coverage seamlessly.

But it is important to have a reliable and resilient automation exercise in place or else the shift left testing experience may not produce the desired results. This is where our state-of-the-art end-to-end test automation platform can make a difference. Schedule a free trial today to learn more about adopting modern testing strategies like shift left, faster with our codeless platform. 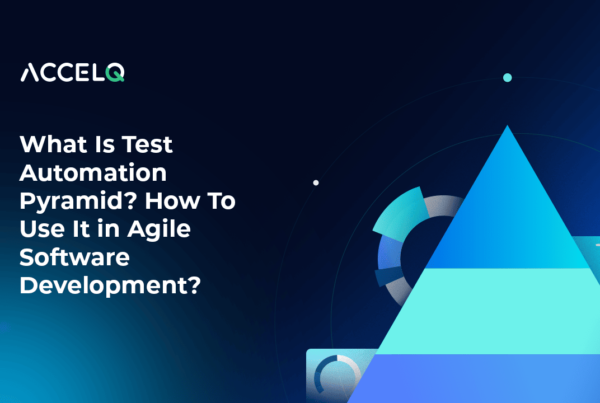 What is Test Automation Pyramid? How To Use It in Agile Software Development? 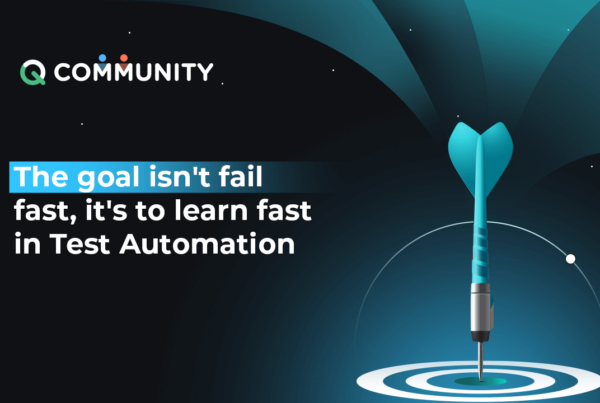 The goal isn’t to fail fast; it’s to learn quickly in Test Automation.

The goal isn't to fail fast. It's to learn quickly. We should celebrate the lessons from failure, not failure itself.
Q Community